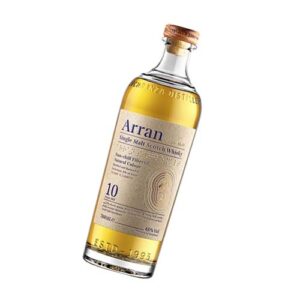 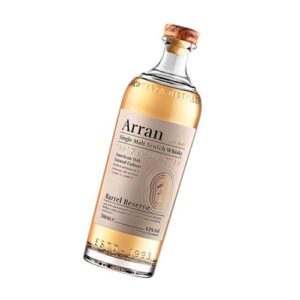 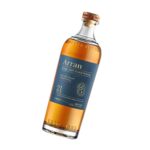 An expressive fruit melange packed full of stone fruits (apricot and peach), with grapefruit and gooseberry in support. Spice runs throughout – cedarwood and stem ginger with a touch of brassy polish inferring the level of maturity this Arran has now obtained. Depth comes from milk chocolate, buttery pastries and a hint of Ovaltine. The arrival sums up this whisky instantaneously – sweetness vs. spice. It delivers (with a decent mouthfeel) on the fruity promise of the bouquet with orange zest and lemon tea (rather the St. Clements) alongside chocolate covered hazelnuts, light sponge cake, latte coffee and maple syrup – all sweet, rich and dessert-like. The mid-palate changes things up, with the cask influence coming to bear – woody ginger emerges and fades whilst white pepper bitterness flows then ebbs. It’s tantalisingly restrained. In the back palate, madeira dryness sits with chopped walnuts and ripe hedgerow berries. The finish - soft peaches and cacao nibs sit with emergent sweet florals – lavender and potpourri.

A dynamic new force in the scotch whisky industry, Isle of Arran Distiller is one of the few remaining independent distilleries in Scotland. Based at Lochranza on the Isle of Arran, one of the most beautiful and famous in Scotland which lies off the West Coast between Ayrshire and Kintyre. Arran is a unique island known as 'Scotland in Miniature', for it has all of the scenery of Scotland, with mountains and lowlands, glens, lochs and royal castles (including one at Lochranza). Early in the 19th century there were more than 50 whisky distilleries on Arran, most of them illegal and carefully hidden from the eyes of the taxmen. The malt from Arran was shipped to the mainland and enjoyed by the gentry who regularly "took the Arran waters". It was acclaimed at the time as the best in Scotland, only rivalled by those from the 'Glen of Livet'. They had found the purest water supply in all of Scotland at Loch na Davie, high in the hills that overlook the village of Lochranza on the North coast of Arran. Arran is washed by the warm waters of the Gulf Stream and enjoys a microclimate - ideal for the speedy maturation of single malt whiskies. As already stated, the Island already enjoyed a reputation for producing top quality - if illegal - whisky.