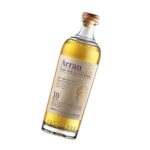 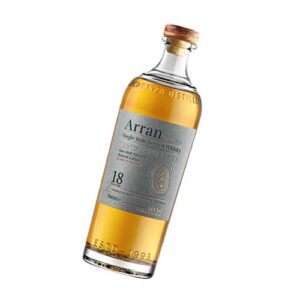 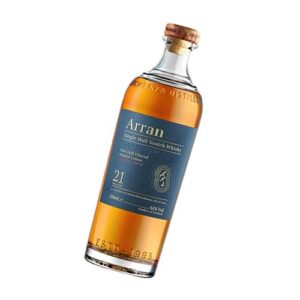 Ripe golden barley in colour. The bouquet shows an initial rush of vanilla sweetness gives way to the fruits of slow distillation - kiwi, banana, cantaloupe melon - with just a dusting of cocoa powder. It is undoubtedly complex and yet the aromas are in complete harmony with the malt. A touch of cinnamon adds a spicy edge to the soft and sweet texture which captivates the palate. The classic Arran citrus notes have rounded with age and reveal new depths of character against a background of sweet oak. The finish drifts over the tongue like golden syrup and fades ever so slowly to tempt another sip. This is a beautifully made whisky. Arran has come a long way in 10 years. Truly the best things in life are always worth waiting for!

A dynamic new force in the scotch whisky industry, Isle of Arran Distiller is one of the few remaining independent distilleries in Scotland. Based at Lochranza on the Isle of Arran, one of the most beautiful and famous in Scotland which lies off the West Coast between Ayrshire and Kintyre. Arran is a unique island known as 'Scotland in Miniature', for it has all of the scenery of Scotland, with mountains and lowlands, glens, lochs and royal castles (including one at Lochranza). Early in the 19th century there were more than 50 whisky distilleries on Arran, most of them illegal and carefully hidden from the eyes of the taxmen. The malt from Arran was shipped to the mainland and enjoyed by the gentry who regularly "took the Arran waters". It was acclaimed at the time as the best in Scotland, only rivalled by those from the 'Glen of Livet'. They had found the purest water supply in all of Scotland at Loch na Davie, high in the hills that overlook the village of Lochranza on the North coast of Arran. Arran is washed by the warm waters of the Gulf Stream and enjoys a microclimate - ideal for the speedy maturation of single malt whiskies. As already stated, the Island already enjoyed a reputation for producing top quality - if illegal - whisky.